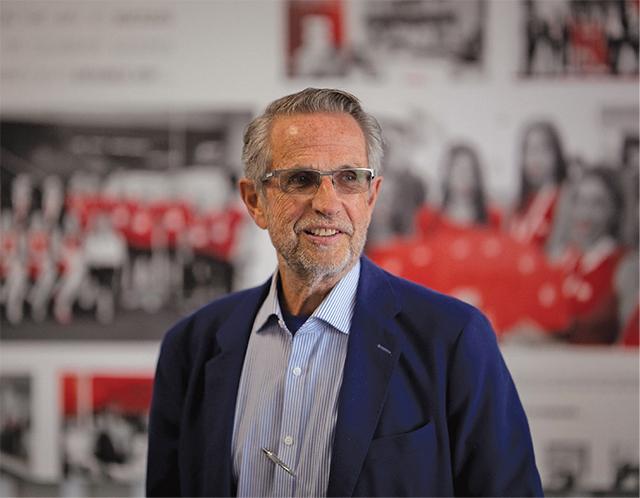 “Is there anyone in your life whom you can manage, someone in your life who wants to be managed?” We need leaders, coaches and mentors. Management is the manipulation of others for one’s own success. Leadership is trust-based life management.”


These are the words of the American businessman and visionary Bob Chapman, spoken at the Belgrade based Faculty of Economics, where he presented the model of “human leadership”. It is a model that promotes the replacement of traditional leadership management practices, which includes caring for employees, as well as conscientious and responsible management.

“Leadership is not a job, but a privilege. “I want you to recognize that the opportunity to lead other people is a privilege, but it also requires skills, as well as courage,” Chapman pointed out.


He first started implementing the “human leadership” model in his own company “Barry-Wehmiller”, which is a leader in packaging industry, engineering and IT consulting, and which has grown in value from 20 million to 2.5 billion dollars since the 1980s up until today.


Quoting surveys done in the United States, which show that as many as 88 percent of Americans feel that they work for a company that does not care about them, and three quarters of illness is caused by stress (the biggest cause of stress is work), Chapman claims that the situation is the same everywhere, as Barry-Wehmiller operates worldwide.


They taught me to manage, not to lead

“My granddaughter Aiden is 22 years old and she finished business school in Colorado. When she finished high school, everyone toasted, rejoiced and were excited as she is going to faculty. However, my eyes were full of tears. Now you can see why. “Why would I be excited that my granddaughter will work in such a world, since there is 88 percent probability that she will not have a professionally awarded career and that she would not be valued at her job?!”, says Chapman.


As he says, during his schoolyears he was taught how to be a manager, not a leader. He attended management classes, acquired the title of manager, got a job in management. And what did he try to do? What he was educated for all his life – he tried to manage people.


“Is there anyone in your life whom you can manage, someone in your life who wants to be managed?” We need leaders, coaches and mentors. Management is the manipulation of others for one’s own success. Leadership is trust-based life management. Through school years, I was taught to look at people as objects of personal success, and my education has always been about me and my success: getting a good degree, getting a job in a good company, earning money – and that’s the way to happiness,” says the creator of the “human leadership model.”


A journey to truly human leadership, when we have that privilege, is actually about people, purpose, and results. Thus, it starts with basic responsibility towards people, your care i.e. knowing that you will influence their health and their attitude towards the family. It continues with a purpose that inspires and is shown in the results, because in the end we create value. That’s the key. We have to go a long way from being managers to being leaders. From manipulation to responsible leadership, from me to us”, says this visionary.


Why not make the job fun?

Bob Chapman underwent three transformations, which “transferred” him from traditional management to leadership.


First, in 1997, I said to myself, ‘Why can’t work be fun? Why do we call it work?’ At the time I created some motivational programs, which had a positive effect on the results, and we noticed a big change in workers’ mood. People started having fun and they started creating value.


The third happened at the wedding of my friend’s daughter. While everyone was focused on two precious beings, I started thinking that we have 12,000 people around the world within our company, who are just as precious as that young man and that young lady. “Every person who works for me is someone’s precious child, and the way I treat all of them will deeply affect their lives and the lives of their loved ones,” Chapman said.


Chapman, who with his wife, Cynthia, has six children and twenty grandchildren, admits that he took parenting classes, which helped him better understand how to treat not only children but adults as well. As he says, you have to give them compliments, praise them publicly. Thus, within the company, they created a program whose goal is to find goodness, emphasize goodness and say “thank you”.


The winner for recognizing goodness receives a red sports car, which can be driven for a week. Proud owner of the title of the best colleague, not the best worker.


Chapman, who has interviewed more than 500 winners of this unusual competition so far, says that all of them emphasize three things after the victory. That it is the most significant recognition in their lives. They call their spouse and say that they have won and say they will drive their mother in the car – not their father, it is always their mother – Chapman points out.

“Because he is one of the people they work with every day and they had no idea what they thought about them. The spouse is called to say that they have won. These are the words they use, but they actually want to say: ‘How happy you are because you are with me!’ And they would like to drive their mother first because the father is always perceived as a source of achievement, and mother as a source of goodness. In that way, they want to return to their source of goodness first, to tell him that they have become good people,” he said.


Listening is the key to success

“When our team started the idea of turning managers into leaders, we initiated listening lessons. I said, ‘Why do we have to teach adults to listen? Well, we all know how to listen! ‘I was outvoted by the team and we decided that a three-day intensive course of empathic listening would be our starting point. A few months later, while I was in Minneapolis, a young lady approached me and told me she was attending my course and it had changed her life. I couldn’t believe it. She said: “Now I know how to raise my child.”


This encounter, he says, opened both his heart and mind. He began to travel across the country and listen to the opinions of those who attended the empathic listening course. Reactions were unbelievable. The course saved marriages, reconciled quarreling relatives, brought children and parents closer, etc. The point was that no one said “The course helped me be a better accountant” and something similar, but “It affected my private life”. “I was deeply moved. Cynthia and I now have a non-profit organization. “We visit cities, we have around 70 professors who give lectures all over the country,” he said.


“I was interviewed by a professor at the University of Washington four years ago. After a two-hour conversation, he told me that I was the first director they ever talked to who did not talk about his product. I said that we talked about the product all the time, and that product is our people. I will not go to the grave proud of big machines, I will go proud of the people who designed and built that machine”, Chapman finished his presentation.