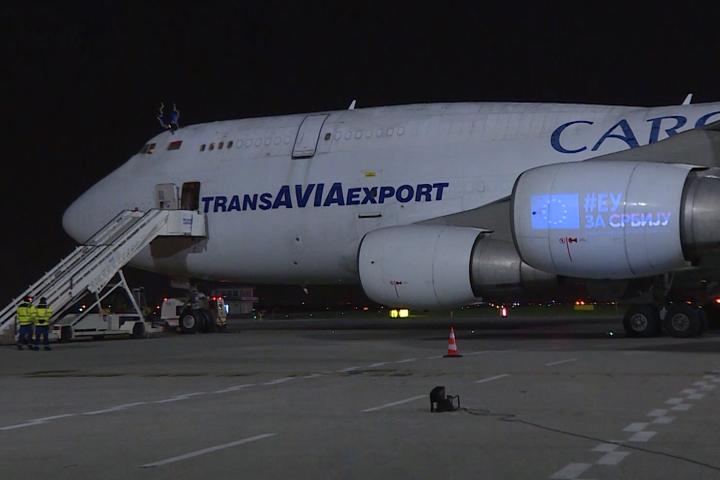 Another airplane with medical aid for Serbia from China landed at the Belgrade airport “Nikola Tesla”. The flight from China was organized with the assistance of the United Nations Development Program (UNDP) and costs of around US$ 460,000 were covered by the European Union. The Prime Minister Ana Brnabic greeted the airplane at the Belgrade airport. She said that airplane from Chinese Tianjin had delivered clinical respirators, non-invasive respirators, protective masks, protective suits, tests and equipment purchased by the Republic of Serbia from the budget, but also donated by China and companies from that country, primarily HBIS, the owner of “Zelezara Smederevo”, but also IBS and Elephant Alliance. “This is a message of solidarity and unity, and a beautiful example of how the world becomes one in difficult times, and times are difficult, not only for the Republic of Serbia, but for the whole world. The Europe is going through the most difficult times and greatest challenges since the World War II.” In these difficult times, solidarity is paramount so that we can all defeat this terrible virus, the Prime Minister said. She pointed out that the flight was assisted by UNDP, while the flight costs of around US$ 460,000 were covered by the EU. “The EU covers the cost of at least four flights,” the Prime Minister pointed out. The Head of the EU Delegation to Serbia, Sem Fabrizi stated with RTS that the remainder of the announced EU aid of EUR 15 million, which was approved for the initial aid in combating the coronavirus epidemic, will arrive in Serbia in the coming days.