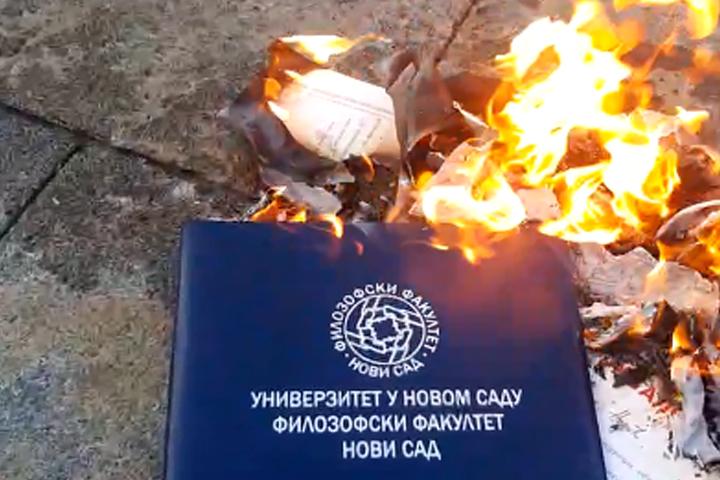 A teacher of the Serbian language has burned all her diplomas and licenses in front of the Parliament of Serbia, dissatisfied with the general situation in society. Teacher Ena Nedic burned all her certificates of excellence, university diplomas and licenses she had acquired so far in front of the Parliament building, and she said that she did not want to live in such a country. “I am Ena Nedic, a licensed teacher of the Serbian language. With a symbolic gesture, on my own behalf and on behalf of all the young people leaving the country, I want to thank this paradoxical state for an opportunity. I am extremely ashamed. I am ashamed on behalf of all those who do not feel any shame,” she said, mentioning ministers and members of the government who were in office “for dubious reasons”. At the steps in front of the Parliament, there is the leader of the Dveri Movement, Bosko Obradovic, who is on hunger strike, demanding, among other things, the postponement of the elections. He was joined in his strike by MP from the Dveri Movement, Ivan Kostic. Until this afternoon, MP from the SNS, Aleksandar Martinovic, was also on hunger strike at the same place, demanding from the prosecutor’s office to issue a statement regarding the attack on MP Marijan Risticevic.